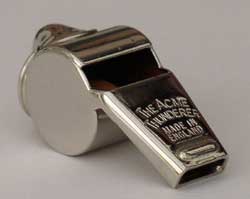 There is a classic whistle sound that most people associate with a drum major. It is bright, crisp, and cuts through all other noises so it can be heard. It has a sound of authority. When blown loudly it projects confidence. The genuine cork ball inside gives it a trill that flute players envy. Of course, I’m talking about the Acme Thunderer.

It may be sick to love a whistle, but I confess I am a big fan of the Acme Thunderer. (Available at most quality sports supply stores.) Made of brass and plated in chrome, it has a sound of a quality instrument. Nothing made of plastic or cheap steel even comes close.

No. I do not own stock in the company. And no, a promotional fee was NOT paid. I have just always loved the sound these whistles make. It is THE sound you expect from a confident leader who is putting a group into motion.

There is a certain amount of technique that is required to get the proper sound.

First, a weak, half-hearted, attempt at blowing your whistle will never do.

If whistle blowing was written on music it would marked, Fortissimo – Staccato. (Or in simple English – REALLY Loud with highly defined notes.)

The way to do this is similar to tonguing on a brass instrument. Place the whistle firmly between your teeth. Don’t be timid. Stand-up straight. (Just like your mother always told you to do.) Place your tongue against the end of the whistle between your teeth. Increase the air pressure in your mouth. Then increase it a little more. Pull your tongue back and a sharp blast will come out of your whistle. Snap you tongue back on the whistle to stop the sound crisply.

A weak, sickly, “I’m really too shy to do this job well” whistle will sound like:

Each sound dies at the end in a whimper.

Like anything else that’s worth doing well in life, you should practice playing your whistle. Go out to a large open area where you can make some noise. A football stadium works well. (If you have a REALLY big back yard that is about the size of a football stadium, that would also work well.)

Do not bring along dogs with sensitive ears, or young children who are easily frightened. You are going to make some noise, so be ready for it.

Experiment with your whistle. How loud can you go? Practice going louder. See how long you can sustain a note. Practice playing a four count blast, followed by a quick breath and four more short whistles. Be sure your last short whistles don’t die off because you ran out of air. Work at controlling your air pressure and volume so all four whistles are identical.

So get the classic whistle and learn to play it well. You may find that other less informed drum majors will secretly envy you and members of your marching band will snicker when they hear other drum majors with timid, plastic whistles.

The drum major’s whistle is often the first thing that happens in a performance. It creates that important first impression for your audience. (Also, your band needs to hear you to start together.) The better your whistle techniques, the better your performances will be.

(Get more information about whistles and commands by also reading “The Two Parts of Every Command.”)