(Editor’s Note: In 2000, the Santa Clara Vanguard Cadet Drum & Bugle Corps made history. They not only captured the Division II Championship, but went on to end up 17th overall, besting a number of Divison I semi- finalists. Their “Big Brothers & Sisters” in the Santa Clara Vanguard also ended up as a top finalist. This was the first time that two corps from the same organization both made it into the Top 25 in the same DCI Finals.

This is Drum Major Kelly Johnson’s account of that extraordinary season.) 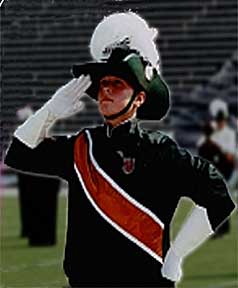 It all started back in November, with the first workshops. The people who stood in the horn arch had the look of scared sheep. Their eyes constantly moving, seeing if they were doing the right thing, comparing themselves to the next. It was obvious who the newcomers were compared to those who had already earned a spot in the family. Those who showed confidence, already belonged. Those who were ready to, were rookies. Seeing this, I knew it would be an awesome year.

The first Cadet corps rehearsal was the Sunday afternoon of Thanksgiving weekend. Looking around, I saw determined faces, wanting to be part of our family and willing to do whatever needed. But I really didn’t see this family come to together until the January Camp, almost two months later. I remember the Friday night rehearsal, when the hornline played together for the first time. They were out of tune and weak sounding. Sunday night, I went home and began to do the five hours of homework I still had left for school. I was feeling anxious about the 2000 Cadet corps. We had great potential, I just hoped we knew how to use it.

After watching the corps grow throughout the next few months, with weekly rehearsals and monthly camps, I finally came to the conclusion that we did know how to control our potential and that it would be the factor to take us to finals.

Fortunately, the instructors must have seen this too, because they constantly pushed us to be our best. By the time the April camp came around, I was ecstatic with the people we had in our corps. They were some of the strongest, most determined people I had ever seen. These people were making history and setting the standard. We had started learning the drill during the Sunday rehearsals. The out-of-towners who came in that weekend worked their butts off to catch up. Failure was not an option and everyone knew it.

Memorial Day Camp was the make it or break it point for the season. The corps seemed to understand this and soon came together as a family. We started to be one group, no longer were we the hornline, drumline and colorguard, we were now the Santa Clara Vanguard Cadets.

This is when I saw the first major growth in my brothers and sisters. After we did our final run-through of the camp, I didn’t want to go school, I wanted to start daily rehearsal that week. I knew this corps had the ability to go to finals and win, if we stuck together as a family, and we did.

Once daily rehearsals started, it became evident that although we were good, we still had a lot of work to do. Each day we grew and soon we became accustomed to seeing each other everyday for hours at a time. We were growing with leaps and bounds.

Then, the Concord show came. We went out there and presented a solid show. It wasn’t the best we had ever done, but it was a good step in the right direction. After that, we all became addicted to the adrenaline rush of a show. We started working harder at the rehearsal, taking the road to becoming SCV.

We then began to get into the routine of a week of daily rehearsals, followed by a weekend of shows. We went down to SoCal for a weekend, then came home for our home show, Pacific Procession. Then, we went further down south, only to come home and compete in Sacramento and Santa Clara, our last shows in California.

These tours and rehearsals helped us grow and become the Vanguard we all wished to be — but we had a long way to go. We didn’t really become a close knit family until we went to the East coast.

This was what we needed, this was the time in which “Show Day” became a common phrase. Gym floors and bus seats soon became our homes. We went from school to school, field to field. No one cared what they looked like when they woke up, it didn’t matter if you were having a bad hair day, we were all doing it together.

We all took the same cold showers. We all ate the same salads. We all woke up to George Brown announcing our daily schedule. Each and every member soon took responsibility for themselves and everyone else. The group matured rapidly. I still remember the first show the hornline opened with “O’Canada.” All at once, the pride for each other and our purpose became evident.

Later, at the first full-corps retreat, another, more immature, corps tried to start a fight over a line-violation. I remember the pride I felt for the corps when they stood there and didn’t fight back, showing the maturity we had.

At that moment, I knew that we were no longer a feeder corps, but a corps of our own. The whole corps was beginning to realize this too.

Finally, finals week came. Monday night was Preliminaries. The lightness and darkness of sky only helped to illuminate our strength. I could feel the strength of my family. We were stronger than we had ever been. Our warm-up was focused and intense. This field was ours.

We entered the competition area with power. You could feel our presence for miles, we were so powerful that night. “That was the show.” We left the field with the same power and energy we began with. There was a silent agreement that we had just done out best show ever.

Then, the scores were announced. We had done it. We had overtaken our prime competition and given our best. The enthusiasm on the bus ride home was fantastic. But we all knew, “First place today, last place tomorrow.”

Tuesday, we took a field trip to Byrd Stadium. Looking at the stands in wonderment, you could see for miles from the top row. We pictured ourselves on the field. The goal was in sight now.

The next night, we took the field to an overwhelmingly loud audience chanting “S-C-V!” Our older brothers and sisters were there to support us! We all grew six inches.

We took our opening set and the audience became silent. I raised my arms, counted off, and WHAM! All of a sudden, the stadium erupted in sound and energy.

We hit our first sustained note – it was so loud, the cheers could not be heard. The focus of the group was intense, the strength of the sound, magnificent. The last note of the opener, a gunshot.

The pride and power I felt from the group was overwhelming.

The second song started perfectly, capturing the audience. Then, it grew to its height of enthusiasm and the corps became the song, living the show. The drill was perfect, the song ended wonderfully. The applause raised and lowered. The solitary sound of a mellophone pierced the silence as amazed crowd watched to see what else this so-called “feeder corps” could do.

The ballad brought tears to my eyes as I silently sang the words we had made our own. The soprano sang its solo and the hornline turned to play the loudest, strongest, prettiest note ever played, only to softly float down to the final chord.

Yet, as I turned to the bass drums and started the closer, the percussion took the show, playing its best, earning the 19.9 it received from the judge. They played perfectly. The strong and confident horns took over. We reached the seven count halt and the pit took over. The drill forms, majestic. There was no mistake that we were the disciplined perfectionists we had worked to be. The hornline added to the pit, the drumline on top of that, and the climax hit.

Accompanied by the echoing sound, the drill looked fantastic. Then quietly, the chorale began. The hornline sang and the guard became the music.

Then, we accelerated. Our hearts beat faster, our energy rose, we formed the arch and played the loudest we have ever played. The energy everyone put into the end of this show was spectacular. There is no way it will ever be replaced. We ended with power, strength, and perfection.

The audience was on their feet, the sound of their applause was thunderous.

The Vanguard Cadets were no longer a feeder corps, but a successful, mature, fully-grown corps that deserved the gold medal it received.

The rest of the week we made history, on the flight home, we grasped onto the time we had left to spend with each other. The planes landed and we all went our separate ways, only to see each other again at banquet for our final farewells.

Our friendship will never die, and that place in our hearts for each other will never be forgotten.

Ironically, the title of our show “Journey out of the Darkness,” represents our season. We started in the dark, uncertain of what was in front of us, uneasy of what might be there. However, slowly but surely, we gathered our strength, and together we traveled the journey from the darkness to the light, making history in our wake.