How to coordinate multiple field conductors By Rick Wilson 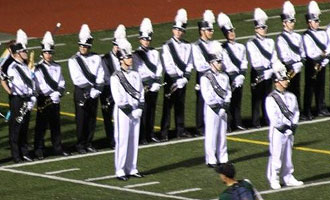 As marching bands and drum corps have gotten larger, they have begun to turn to multiple drum majors. This can be both a blessing and a curse. It depends on how well the drum majors coordinate with one another and how well they achieve their primary purpose: leading the band successfully through their performance. Here are some suggestions that will help.

First, it is important to define everyone’s role. The main drum major usually conducts from the drum major platform on the fifty-yard line, a little bit away from the sideline.

The second drum major will then assist with the conducting responsibilities when the band moves toward one side of the field or faces backfield.

Some bands will add a third drum major to be able to cover all opportunities, so there are conductors on the front, in the back, and off on the sides.

Here is the vital thing to remember: the purpose of a field conductor is to assure that all band members can see where they are in the music at any time. The purpose of multiple drum majors is to make sure that when the band is facing one way or another, they always have a conductor in view.

The problem is that many field conductors don’t really understand this basic purpose, and as a result, you will see situations where a backfield conductor is conducting in a full-sized pattern even though every member of the organization is facing front and no one can see them.

I recall seeing one performance where a soloist was in the front field, and the rest of the band had rotated to the back field. The second conductor had moved to the back position, and was conducting the full group in a full size pattern. The main drum major on the front sideline had pulled the pattern down to a basic beat

that was completely appropriate for the performance being done by the soloist.

A third field conductor, who was over on the far twenty-yard line, actually stopped conducting and dropped out of the pattern, knowing that no one in the performance was actually looking at her and it would simply be a waste of time and effort to conduct at that point.

This was a wonderful example of a group of conductors being tightly coordinated, and also being able to fully understand what was happening in the show both musically and understanding all of the drill and movement.

As a result, every member of the band always had a clear view of a conductor at every given point. This, of course, kept the entire performance moving forward and had everybody playing together.

What about swapping drum majors?

Frankly, in all of the times that I have seen it done, it has very rarely worked to the benefit of the band.

Usually the transition takes way too long. Usually it creates a huge gap and dead point in the show. Usually there is no real benefit in the changing of conductors other than, possibly, giving more than one person the chance to conduct the band.

My recommendation is that one person has the role of “main conductor” and stays on the main stand. The other person (or other people) then share the role of “secondary conductor” and handle placements when the band is spread out on the side or going to the backfield.

This maintains a nice flow and continuity to the show; it also makes sure that all of the conductors are well-coordinated and there is a nice, intelligent design to the performance that is being done.

So, if you have more than one conductor, plan out the show. Coordinate who is doing what role at every given point of the show.

The clues you will find for what to do are in your music, in looking at the drill, understanding where the band is facing, and where they are moving.
Remember, the goal is for every member of the band to always be able to see a conductor so there is never any uncertainty or doubt as to where the performer is in the music.

This helps the execution of the show as well as the confidence of the band performing. Give it a try – I think you will find that your performances can move from “pretty good” to “excellent”.